Our family's story of traditional group gift exchanges and how we ended years of uninspired, boring, stressful gift giving and found the solution to bringing more fun, joy and ease into our holidays. 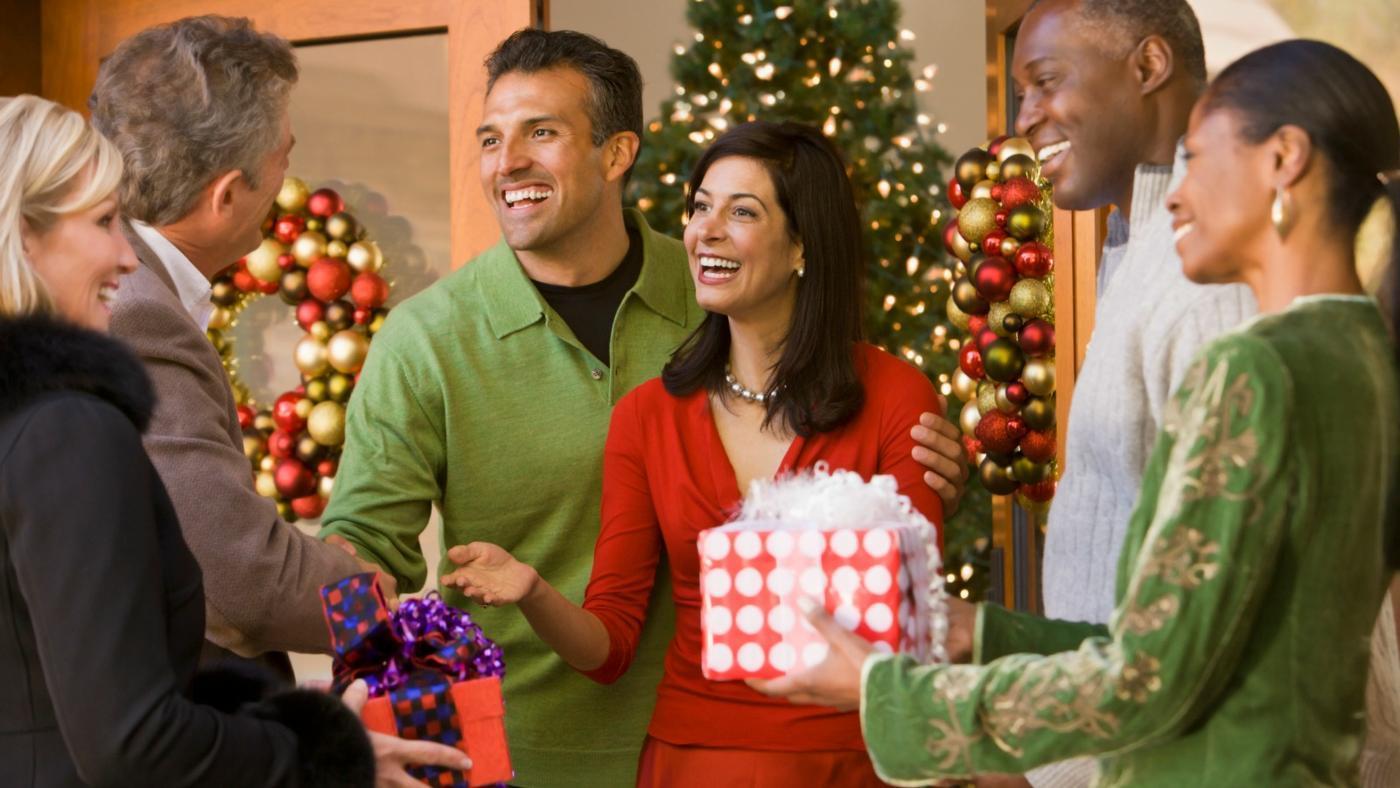 This Christmas gift exchange story is one that forever changed our family's holiday tradition. In the early days, we used to gather each Christmas Day around 3pm at grandma and grandpa's house, sometimes over 25 people, a mixture of all the families including aunts & uncles, in-laws and cousins.

During those times, if you were around driving age, you would join the adults as a part of the family gift exchange where names were drawn and you were responsible for shopping for that person's gift.

Basically, at Thanksgiving each year, we would organize the random drawing of names and each name would be folded up and placed into the bowl then one of us would go around getting people to choose and keep it confidential.

One by one, we all selected a name and the only rules were - you couldn't choose yourself, your spouse or your own immediate family members because we did our own exchange with each other on Christmas morning. 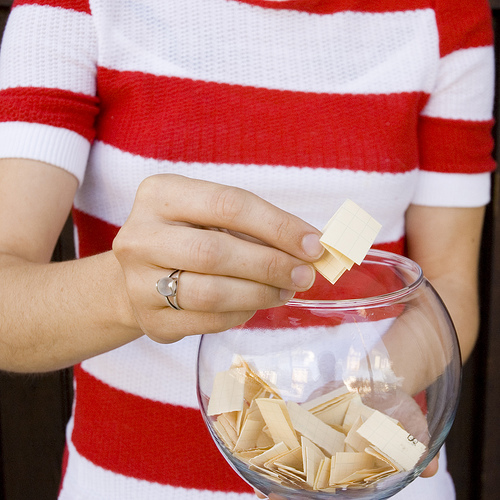 We had a firm $15-$20 gift limit per person to spend.  So each year, you kind of became the family ambassador as you would buy a nice gift for that family member to be opened on Christmas Day.

And boy... this could truly become a dreaded moment for some because, I don't know about in your family but, in ours we have one member in particular who is super hard to shop for.  I mean, there is not one good idea you could come up with for a gift for him - and even if you think you did that year - you still couldn't escape it, the constant ribbing and embarrassing comments so you had to be prepared to get roasted by Uncle Joe.

Each year when names were picked and you didn't get Uncle Joe, you did a little happy dance and waited to find out which other sucker was the doomed one. Of course we found the humor in it after a while and it turned into a fun family joke.

This was our family grabbag and it worked because we were all together having fun and making memories.

About that time, our family started shrinking, losing older senior members that were kind of the catalyst for keeping the large group together. As the smaller individual families started to grow and new generations of in-laws and grand kids showed up, we then evolved into having a large extended family gathering on Christmas Eve night with about 25-30 people (sometimes inviting good friends of the family or out of town guests, and any new in-laws that joined the family were welcome too).

And we started a new Christmas gift exchange story on those occasions  - whoever was that year's Christmas Eve dinner host would ask everyone to bring a wrapped gift for a Secret Santa style gift exchange.

We no longer had to pick a name or feel the dread or struggle to reach for an idea for a specific person who was hard to buy for.  We just showed up with a random gift around $15 limit and wrapped it and put it under the tree and it was a white-elephant-style mystery grab.

We each had the fun of opening an unknown gift from an unknown person and we spiced it up by adding in the friendly family competition of "stealing".   Someone who got that year's candle or coffee mug would inevitably "steal" the bottle of Bailey's Irish Cream that someone would unfailingly bring each year (you know who you are). 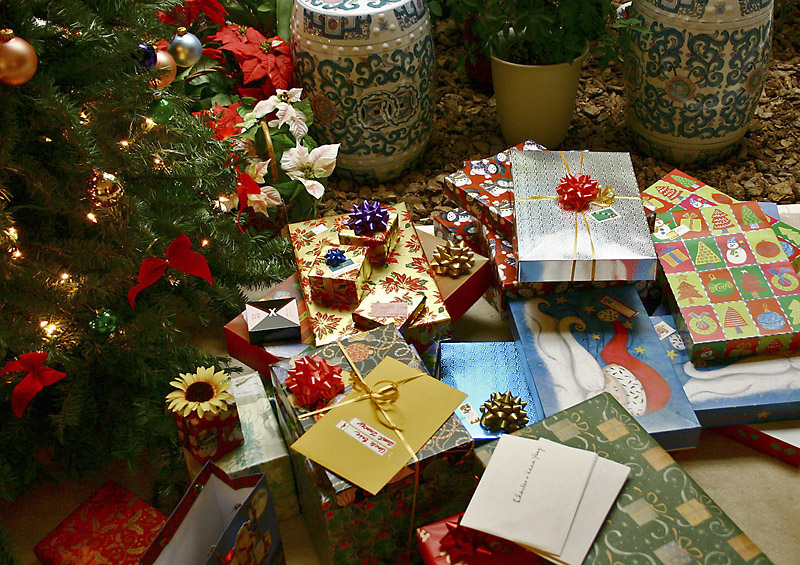 Now this Christmas Eve tradition went on for us for many years while at the same time our individual families would continue our traditional Christmas gift exchange story on Christmas morning. Even through our college years and after my siblings both got married and had two kids each, we would all have a family sleep over at mom & dad's house so we could wake up together and have brunch and open gifts. We made countless special memories in those days.

Over time, we began to feel the need for a shift once the new spouses and kids came into the picture, let's face it... that's six more people to shop for and 6x the money spent, but it was more about feeling bogged down with the chore and hassle of shopping instead of it being the joy of giving.

So we changed our Christmas gift exchange story again and went back to the old tradition.  The old 'draw a name from a hat' scenario was revived and the only rule was you can't pick yourself or your spouse, everyone else was in the mix. Oh... and you also had to make a wish list and prepare it by Thanksgiving Day when we were all together and able to draw names.  That way, we had a month to shop and could even shop the deals on Black Friday and Cyber Monday.

We also decided to boost the dollar limit to $100 because we figured our Christmas gift budget would all be put toward one person plus we could put higher ticket items on our wish lists or get several smaller ones and make a theme out of it.  Mind you this is when the nieces & nephews were all young so we would happily continue to shower them with gifts up until they graduated from high school -eventually they would join the adult gift exchange and that became a main focus of the day's celebration. 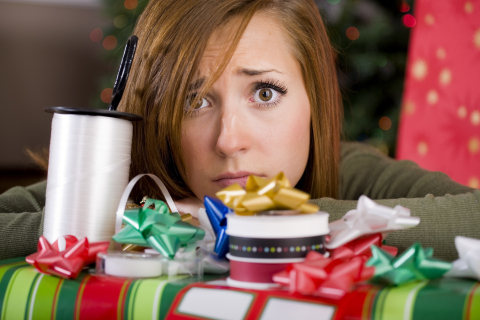 However, the actual presenting of the gifts was always a bit controversial in our loud and very particular family.

Each year we would announce it was time to unwrap the presents and everyone would scramble and hurriedly grab a beverage, their cameras & video recorders and find a place on the couch or chair forming a circle.  We liked for the youngest ones to play "Santa Claus" (red hats and all) and be the ones to hunt through the piles and hand out the gifts in a specific order starting with the adults. Sometimes we'd go from oldest to youngest, or visa-versa and pepper in one for each kid after the first few (because they undoubtedly had more to open).

Here's where it became controversial... one camp was known to wrap each adult gift for their selected family member individually and thus causing multiple gifts to be presented during the rounds which was more fun and giving lasted longer, when others only had one large gift to receive and it felt awkward that it didn't even out.

In the end, it was decided that we would wrap all adult gifts, stacking them all together if there were multiples, and we would give them as one.

Do you get the idea of the level of complex organization and conversations that were going on and how seriously our family took this beloved tradition? This Christmas gift exchange story lasted for about a decade...

....until our family gift exchange got another major revamp and we reached our goal of turning it into a super fun, affordable, Gift-a-palooza which we've enjoyed now for five years and have been bragging to all of our friends about it. They inevitably ask about how it all works and you might be interested to know too so I wrote about how we came up with it here.