The Impact of The Secret On Oprah

Watching The Secret on Oprah was a milestone moment in my life which also sparked a new phenomenon - an awakening of new seekers all around the globe.

Hard to believe that it's been over 10 years ago now that I watched The Secret on Oprah's show and it was a day of instant clarity in my life. I can remember grinning from ear to ear and feeling a warm sensation rising inside me at the thought of how this new profound truth and new perception of the world was going to change my life.

I tuned in and right away something in me said, "YES! this feels true. Our thoughts DO affect what shows up in our lives and we ARE actively (knowingly and unknowingly) creating our reality because it's ALL just energy. "

A week later, a follow-up show was recorded. Then I heard countless stories about the thousands of other people who were all saying that they were instantly affected and awakened in their own lives by seeing Oprah's show on The Secret too.  Years later, it's a story you hear so many sharing as that having been a pivotal point in their personal development path and all of the new inspirations and creations that arose since then.

And for me, it didn't end there.

I had no idea that learning this information on that day would ultimately change the path of my life forever.

After finding The Secret movie online and excitedly watching it the very next morning, I instantly began my search for more about how everything is energy and how this works and why.  I did not hesitate for a moment. I immersed myself in Bob Doyle's expert Law of Attraction teachings and within two months, I taught myself how to create and launch this website so I could share this message with other seekers. And over the years since, with focused determination and a set of amazing transformation tools and mentors, I've gone on to achieve things I NEVER dreamed I would.

The Secret on Oprah's Role in The Color Purple 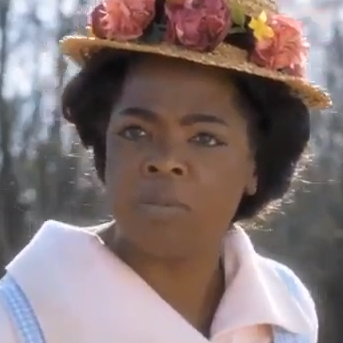 Oprah as Sophia in The Color Purple

In the video above of Oprah's interview with Larry King, she says that the message of The Secret needs to go further and that the mistake that was made is that they tried to let that be the answer to all questions. The Law of Attraction is only ONE law, there are many laws working in the world.  But it's very true that the way you think creates your reality.  There are other factors going on so it's not everything... but you really can change your own reality based on the way that you think.

Watch this compelling video of Oprah describing how in 1985 without even knowing she was using The Secret, she brought in the role of Sophia into her life and how she had never wanted anything as badly, as hard or as much as that and that the wanting of it, and then the surrendering of it has taught her how to live in a space of the letting go.

She says, "When you have worked as hard and done as much and strived, and tried, and given, and pleaded, and bargained, and hoped - just surrender.  When you have done all that you can do and there's nothing left for you to do, give it up. Give it up to that thing that is greater than yourself and let it then become a part of the flow. The wanting of it and then the surrendering of it is what taught me how to live in a space of letting go."

Read more about Law Of Attraction

Read about the 7 Laws of Attraction

Read about the 7 Spiritual Laws of Success